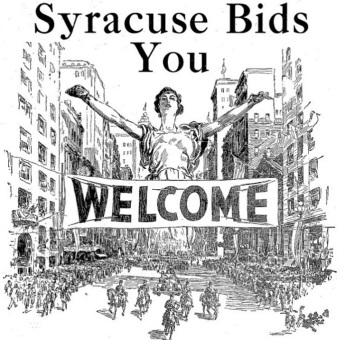 David Haas is a nonprofit program manager; he volunteers for several local organizations with the mission to promote and develop the region. Most notably, David founded the popular @SyracuseHistory Instagram account in 2013 which now has over 14,000 followers. Since its inception, his work has been featured by a variety of media outlets including The Syracuse Post-Standard, Time Warner Cable News, 9WSYR, The Daily Orange and Syracuse Woman Magazine. In 2016, his account was voted ‘Best Blog’ and David was awarded ‘Best Social Media Personality’ by the Syracuse New Times. Subsequently, he launched the website, Storycuse.com, a platform for human interest storytelling. David has also been recognized by the CNY Business Journal as one of the 40 people under 40 who have excelled in the workplace and in the community. Late last year, Katrina Tulloch of The Syracuse Post-Standard named David as one of Syracuse’s leading innovators. Most recently, David became a freelance writer for the Syracuse New Times. He resides in the Eastwood neighborhood.