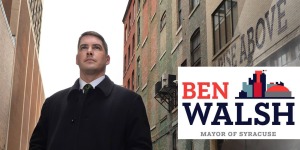 Mayor-Elect Ben Walsh shared his vision for the next four year’s of Syracuse’s future at a bonus Strathmore Speaker Series event on Monday, December 11, 2017. A full video recording of the event is available on the Series’ Facebook page here.

Ben Walsh is a Syracuse and Strathmore native. In January 2018, he will assume office as Syracuse’s 54th mayor, and the first independent elected as mayor in over 100 years.

Prior to entering Syracuse’s mayoral race, Mayor-Elect Walsh earned a master’s degree in public administration (MPA) from Syracuse University’s Maxwell School and spent 16 years working in the public, private, and non-profit sectors, including 6 years as the City of Syracuse’s deputy commissioner of neighborhood and business development. He has played a lead role in some of the most transformational projects in Syracuse’s recent history, including the creation of the Greater Syracuse Land Bank and the successful redevelopment of the Hotel Syracuse.

He is the son of former United States Representative James Walsh – who played an integral role in the restoration of the Onondaga Park Firebarn – and the grandson of former Syracuse Mayor William Walsh. He resides on the west side of Syracuse with his wife Lindsay and their two young daughters.